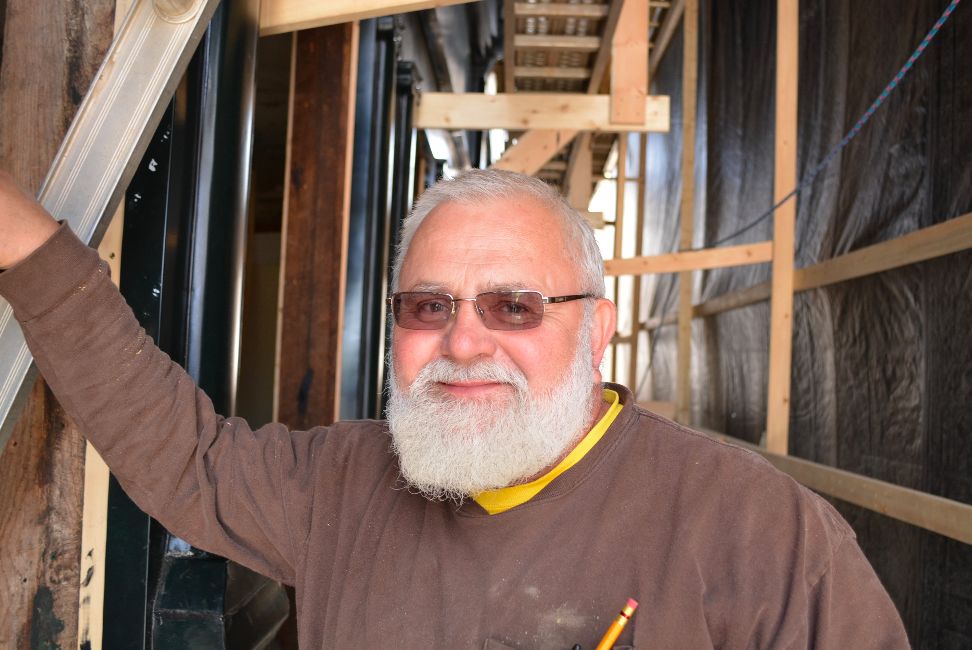 Al Buczek remembers finding a Spanish coin carefully placed in the walls of a 200-year-old home in Charlottesville—his first restoration project. It had been put there by the original builder and he was hooked. That was 33 years ago. “I got my feet wet. I love restoration,” says Al, an Air Force veteran.

Five months ago he started something new, the restoration of not a house, but a storefront.

Building One is Green Front’s flagship building: the first Crallé-owned building exclusively dedicated to furniture and rugs. The two-story Italianate structure, once a striking feature in Farmville’s downtown, was based on a Mesker company design.

Colorful, with copper details, a mezzanine, and stairs that rose from the entrance to the second story—it demanded attention.

But, in the 1960s, the original aging Mesker elements were removed and the building’s shell was slipcovered with stucco to match the style of many storefronts of that time.

Since October, Al and ten of his men have been working to restore Building One to its original splendor and more.

While the spirit is one of restoration, there have been some changes. Mesker designs do not usually have as much depth as Al gave his. “This is our take on Mesker,” says Al.

After finding portions of the original moulding and locating the original pattern used to create it, Al hand carved the Mesker designs in wood and used a 3,000-pound press to fashion the exterior details, including columns, from powder-coated copper. True to its name, Green Front’s Building One will be green, Charleston Green. 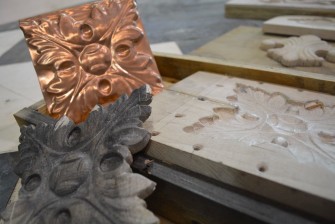 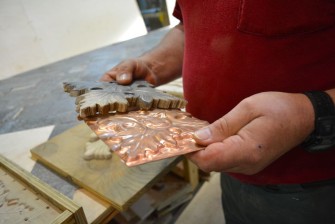 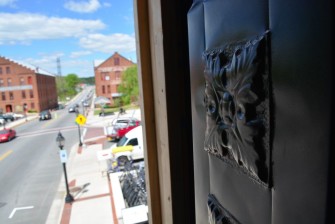 The upstairs windows are over six feet tall and are as light as a feather to raise, due to 47.6 pound sash weights carefully installed to counterbalance them. Thanks to modern technology, they will also be much more efficient since they are retrofitted with thermal windowpanes.

New front doors have been handmade, modeled from a pair of doors found at Caravati’s, an architectural salvage store in Richmond, Virginia. Their solid brass handles were rescued from an 1890’s train station.

Besides cosmetic changes, Al has also worked to straighten and strengthen the building structurally.

Den Crallé has been eager to guide the renovation process. “Al is more like an artist than a contractor,” says Den. “We’ve enjoyed bouncing ideas back and forth. The good ones always reveal themselves.”

Al reciprocates the good vibes. “I love working with Den because he cares about the details,” says Al. Together they have worked to create a cohesive, unique look. For example, reclaimed tin salvaged from a Virginian barn that is being used to create a herringbone pattern on the ceiling under the awning. 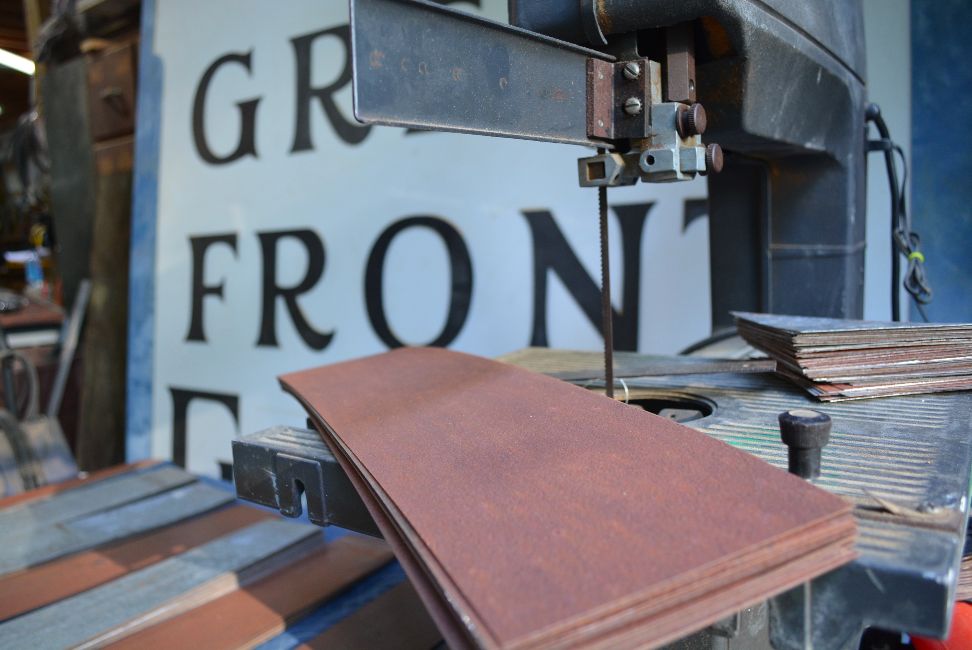 The restoration of Building One’s facade is only a small part of Den and Al’s vision for the space. Last year, Al updated the former rummage room in the back of Building One into a showroom. He hopes to begin work on other portions of the interior sometime in the future. The original beadboard ceiling is still there, under the drop ceiling, just waiting to be revealed.

Al and Den look forward to seeing the entire building restored to its former beauty. 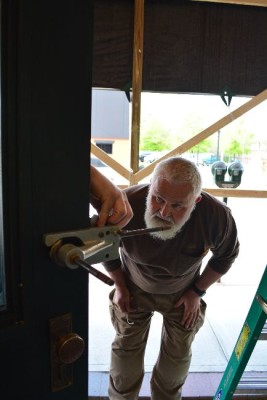 The obvious challenge to restoring a storefront as opposed to a home is the constant foot traffic in and out of the building. But, that also makes it more interesting, says Al.

“Lots of people are curious and ask questions,” he says. “There is a rich base of people who appreciate the old and historic here. We have a beautiful town. If it were not for those who see that importance, all we’d have is parking lots and big-box stores.”

The exterior project is expected to be completed mid-May. Building One will stand tall once again, as a flagship should.

The public is invited to 316 North Main Street on Thursday, May 28, for the grand reveal of Building One’s restored facade. At 5:30 p.m., the plastic will drop to reveal the fully completed project which has been in the works for the past eight months. 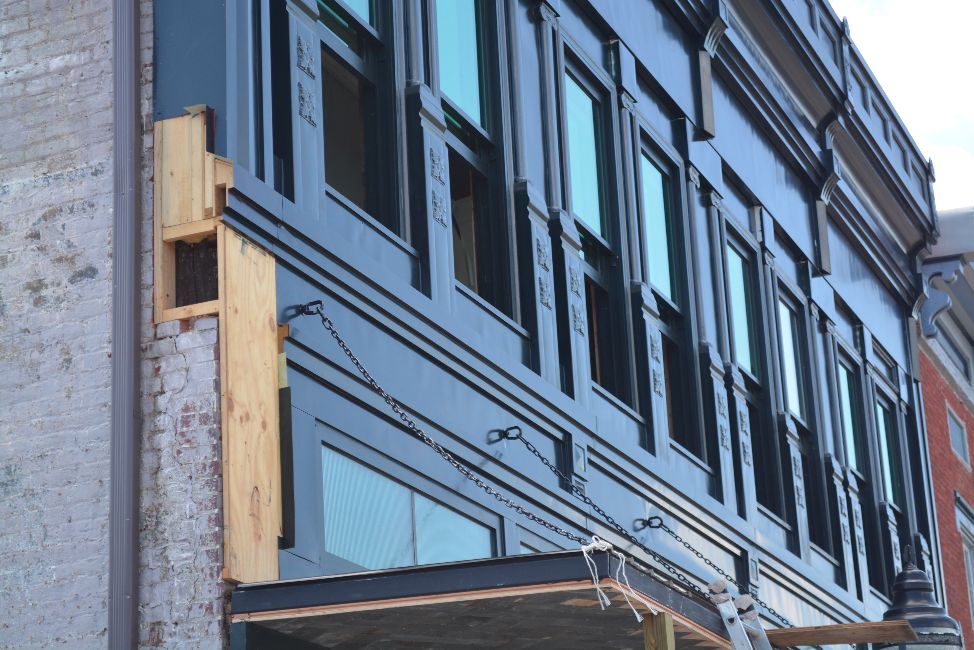