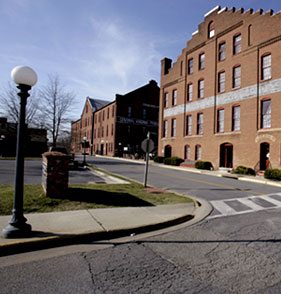 With 2′ thick brick walls, Building #9 is one of three restored tobacco warehouses used by Green Front Furniture.  The warehouses were owned by Dunninging and Paulette (post-Civil War era), one of the largest air curing tobacco facilities in the world at the time.  The tobacco was sent to Petersburg, down the Appomattox river through a lock system by bateaux.  The bateaux were pulled back to Farmville by mules.  These tobacco warehouses were the center of business in Farmville and thought of as “where Farmville began.”

Building #9 has four floors packed with some of the most beautiful furniture made.  Manufacturers found in Building #9 include:

Looking for our current inventory? While we do not currently have our inventory online, you can explore our website to see the manufactures, styles and types of furniture and rugs we carry. Be sure to plan a visit. Each of our three locations offer a massive selection of constantly changing inventory.