Flight of a White Dinosaur 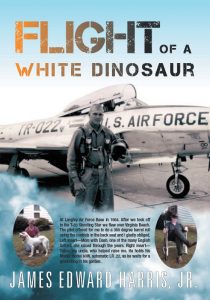 “Liberalism has run amok with too many liberal lawyers, politicians, professors, administrators, boards, and news media
and not enough adherence to our founding documents and common sense.”

Through Jim Harris’ writing he hopes to help swing the pendulum back to the traditional values he believes we have lost as a country.

Harris does not choose to simply jump on his soapbox and rant against society’s ills from an uninformed position, though. Instead he seeks to prove his points by giving the reader a chance to see the failure of specific governmental policies in action through his recollections as a long-time employee of the criminal justice system. Much of the book is filled with his experiences as an assistant warden in different juvenile correction facilities. It is in these often harsh locations that he encounters firsthand how societal attitudes and public policy affect the youth who wind up in the nation’s detention centers.

The author’s memories of 30 years of service with criminal justice is also peppered with several anecdotes, some of which are humorous. For example, there is the one about the young escapee who got turned around along the winding James River in Powhatan County. He ended up pounding his fists on the ground in frustration as he realized after being on the run for three days he had inadvertently made his way back to the Center. Others are not so funny and deal with the corruption of various wardens or other criminal justice officials, some of whom were caught in compromising situations with their young wards. What comes across most in his recollections, however, is how disgusted the author is with many of the policies imposed on the facilities that he sees as detrimental to not only the correctional staff and their youthful charges but also to the system as a whole.

Harris veers frequently in his narrative to offer his readers other glimpses of his life that do not revolve around juvenile corrections, making the book more of an autobiography than merely a memoir of his criminal justice career. For example, he tells several stories from his days as a private pilot, vignettes from his twenty years on active duty and as a reservist with the United States Air Force (most with the lst Tactical Fighter Wing at Langley AFB), and tales from his athletic pursuits in high school and college. He also spends a significant amount of time giving credit to some of the more influential people in his life, such as his mother and his uncle Tellus. The latter was an outdoorsman in Buckingham County and a much-needed father figure to Harris after his dad died at an early age. The author rounds off his book with selected words of wisdom predominantly from his mother and Tellus.

Harris’ early work in journalism and as a Public Information Officer with the Air Force is evident in his skillful word choice and overall writing style. His arguments, such as his critique of the nation’s racial policies in education , the juvenile correctional system, and even the state purchasing/procurement system  are well-constructed and tell a story all too many are facing in this day and age. The state procurement system is fraught with built-in corruption since it eliminates genuine competition in favor of certain groups at the expense of the tax payer. In many ways topics fit with what seems to be Harris’ overall purpose in writing the book, which is to get people talking and motivated enough to bring about what he hopes will be positive change.

Harris spoke about his early years and the values instilled by family and friends to the Farmville/Prince Edward Historical Society at the Old Train Station in Farmville on May 21, 2013. At the end the approximately 50 people in attendance enthusiastically applauded. One lady who now lives in northern Virginia and who had read his book came in town two days early just to attend the presentation. One attendee even wanted Caryl, his wife, to sign the book. Caryl, as credited  in the book,  had a role with most of his career decisions and even joined him on a tour of a maximum detention center. After-wards, they decided it was time for Harris to return to  a desk job in procurement.

On March 23, 2013 the book received an award (honorable mention for autobiographies/biographies) from the Great Southeast Book Festival.

Harris is available to talk to groups about the pervasive corruption and inability to meet the mission, with much humor, due to so much government pandering. Here we are 60 years after the book, Catch 22, and the government has more irregularities than ever and our citizens bear the consequences. Members of an ad hoc group, the Chesterfield Diner Tea Party, that inspired the book have joined Harris during group presentations. Charlie Finley, Verbatim Editing in Richmond, was the editor. In addition to Catch 22 the style for the book followed books/articles written by Pat McManus, an outdoor writer for Outdoor Life, Field and Stream, etc.

Harris may be contacted at his web site: www.flightofawhitedinosaur.com. Any one wishing to join in discussions on contemporary events may meet with the group that meets for breakfast every two weeks in Chesterfield County.  The next meeting is Thursday, August 29 at 8 AM.