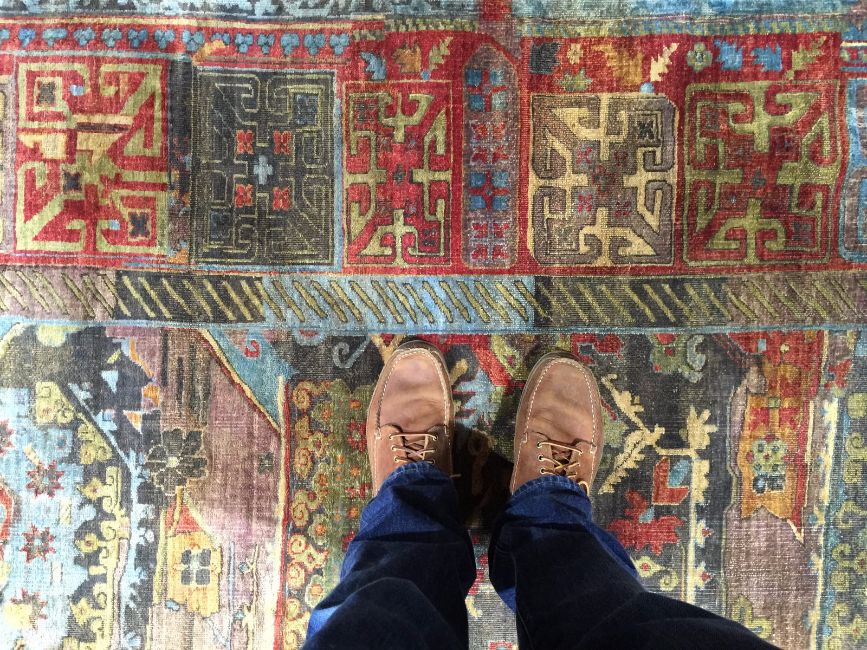 Los Angeles. New York. Farmville. If you don’t think a small town in Virginia belongs on that list, then you haven’t seen all the styles, looks and pieces that Green Front has to offer. Inside Green Front’s signature aged brick buildings are rugs, carpets and floor coverings that you can find literally in only a handful of other places in the country. How does the Farmville furniture mecca consistently, year after year, have its showrooms filled with a collection of rugs usually only found in our country’s largest urban centers?

What’s their secret? Green Front founder Dickie Cralle was one of the first American retailers to travel straight to the source of some of the world’s finest rugs, visiting places like India and Pakistan. Now, his son, Den, will continue to build on the successful foundation laid by his father as he prepares for the annual trip to international rug mega-show Domotex.

As Den preps for this global adventure, the excitement and inspiration are running high. More than just a sightseeing visit, being at this show is essential to staying current in the rug and carpet market. 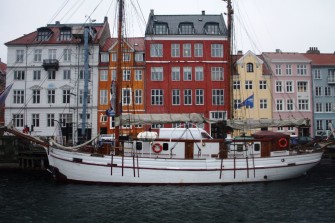 “It’s a rapidly changing industry, very similar to the high fashion scene, and because of that, you have to go. I will see what’s changing, what’s new and what’s not in any more. After just a few hours walking the show, the freshest trends begin to emerge,” he says.
Den will be flying to Hannover, Germany to spend hours roaming the seemingly endless assemblage of rugs and carpets at the show. With over 17 buildings, 1,300 vendors and an estimated 40,000 or more buyers and visitors, Domotex might seem like a daunting prospect to some but not to Den.

“This will be my third trip so I’m excited to go knowing fully what to expect,” he says. The key to success at Domotex is preparation, even down to bringing the right gear. Mid-January Germany is frigid.

“During the year I compile a database of the best, most unique looks from Instagram, magazines, designers and bring the database with me to keep an eye out for those,” explains Den.

And it’s not just the popular looks he’s watching for either. The show is a literal treasure-hunt-meets-goldmine of hidden gems. 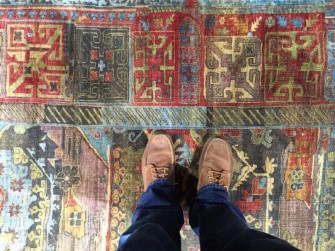 As Den puts it, “If you look hard enough, you’ll find some jewels you never even expected. Domotex is the best way for me to see things that I wouldn’t if we stayed exclusively with our current vendors.”

When it comes to vendors, the event also serves as an essential networking opportunity, enabling Den to strengthen and reinforce relationships with existing suppliers as well as get a feel for what similar companies are doing.

“We get inspiration as to how rugs are being displayed, and even lit,” says Den.

An additional function of the Domotex experience once again circles back to preparation.

“Domotex helps define our yearly trip to India. We basically get a sneak preview of many of the things we will be seeing when we visit there later in the year. We are able to do some homework on what we will be buying and get a head start on that.”

As this critical trip to Hannover unfurls, the anticipation is palpable. But the most exciting part is yet ahead: When the world comes to Farmville as each of this year’s discoveries, trends and treasures show up at Green Front, giving it that unique edge over other rug and carpet retailers. Even more exciting still is the moment you make a part of the world a lasting, and beautiful, part of your home. From around the world to Farmville—make some of the magic yours at Green Front Furniture.